Last time I talked about the importance of drills. But which drills and why? It is time to get specific. There is no better place to start than the drills I use to teach the notorious “double knee bend” and the proper finish of the pull. Yes, that’s right, I teach the double knee bend.


I think changing the way we think of the pull is a helpful place to start. I prefer to think of it not as a first and second pull, but as a pull to set up the finishing leg drive. The way I teach it, the double knee bend is not a serendipitous accident of bio-mechanics, but an intentional setup to put the legs in the best position to drive the bar vertically. Thinking of it as an accident of bio-mechanics is an outgrowth of seeing the pull as a jumping motion. The torso opens rapidly, the hamstrings react and drive the knees and hips forward into the “jumping position” on the balls of the feet, and the upward movement of body and bar is half intention/half reflex. I think this is sloppy teaching that makes too many assumptions about practice filling in technical gaps. It leaves too much to the athletes’ innate ability to “find” the correct technique. Many athletes don’t find that ideal groove and end up with sub-optimal technique. Too many coaches accept this, for the most part, as just the way things work. I disagree.

I start off athletes in the right position to use their legs to drive the bar vertically: 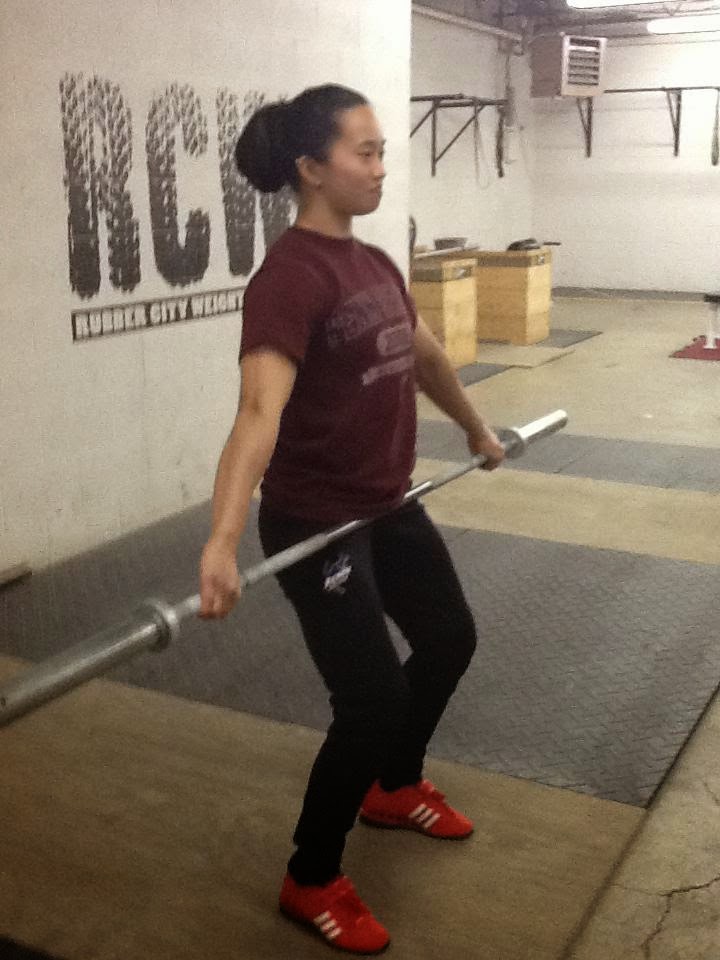 The center of pressure in the foot is back/middle, or front edge of the heel. The torso is vertical with the shoulders behind the bar. Knees are bent and pushed in front of the bar. I don’t want this position to be an accident or the lifter to hit it occasionally. We drill to hit this position consistently. We move to this position from here: 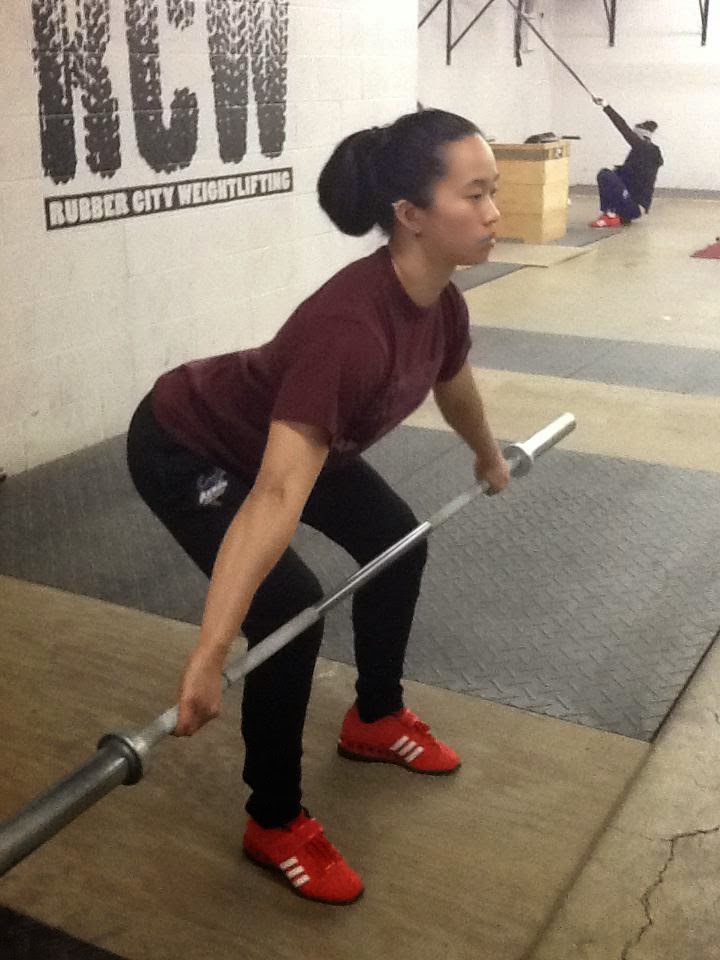 
Then we start working the leg drive. From the power position at the hips, the lifter simply pushes up with the legs, balance still over the front edge of the heels, until their legs and glutes are tight, having used their legs to drive themselves as tall as they can on flat feet. So the drill after the Shifting Drill is Shift and Stand. (Video)

The point of these two drills, which blend into one another, is to control the movement from angled torso with the bar at the knees to vertical torso with the bar at the hips (snatch) so that the lifter does not continue the hip travel too far forward or lean the shoulders too far back. (Over-rotation of the torso) The lifter learns to transition to the vertical torso position under control for the all-important leg drive UP. We do not emphasize the speed of the torso opening in these drills. The emphasis is on the speed of the leg drive vertically. Overall speed does matter, but is only useful when the motor pattern is so grooved in that speed applied to the torso opening will not change the pattern. Before that, too much speed applied to opening the torso is only teaching the lifter to screw up the lift faster. Teaching speed at the wrong point in the lift or too early in a lifter’s career may give them a few kilos and PRs in the near term, but it will ultimately limit their top end lifts.


These drills combine to teach an intentional double knee bend, under control, to hit the ideal power position for vertical leg drive. It is not accidental or incidental. The drills are easy to teach and learn. I’ve used them to correct many “jump-shrugging” CrossFitters who consistently miss out front and lift far under their potential. Before you protest, try them for a while. See if they help. You can check out more drills on my Youtube page.

*Dan Bell is a USA Weightlifting National Level Coach and Head Coach of
Rubber City Weightlifting in Akron, Ohio. He coached Holley Mangold to a USAW Junior World Team, A Pan Am Team, and the 2009 +75kg American Open Championship. He has helped Julie Foucher (2013 CrossFit Games, 2nd place) and Scott Panchik (2012/2013 CrossFit Games 4th place) refine their Olympic lifting technique. Mark Cannella and Coach Bell founded the Columbus Weightlifting Club in 1999. Dan and Mark started the Arnold Weightlifting Championships in Columbus and Coach Bell helped run it for 11 years. After leaving Columbus and a break from coaching, Coach Bell founded Rubber City Weightlifting in 2012 and began producing national level weightlifters again. Dan compares weightlifting to a 300 pound golf swing; the technique is that demanding and precise. He believes weightlifting to be the ultimate test of strength, speed, flexibility, and agility. Dan Bell will be instructing the Vulcan Weightlifting Technique Seminar. or email us at: vulcan@vulcanstrength.com if you'd like to know more about the benefits of hosting a seminar in your facility!

I’m a Better Coach than Klokov - By Coach Dan Bell

I’m a Better Coach than Klokov
by Coach Dan Bell

Yes, you read that right. I am a better weightlifting coach than Dimitri Klokov. So is Don McCauley. And Glenn Pendlay. So too are Stephen Powell, Ursula Garza Papandrea, Mark Cannella, Guy Greavette, David Chiu, Rob Macklem, Jean-Patrick Millette, and other coaches you’ve never heard of.
Cocky? No. Dimitri Klokov is a gifted athlete who came up in a successful system with very good coaches. He’s put weights over his head that most mortals can only dream of. He has won world championships as a junior and senior lifter and medaled at the Olympics. He’s been an elite level weightlifter for close to two decades. However, best I can tell he’s been coaching for about a year.
What CrossFitters, new weightlifters, and young weightlifting coaches have to understand is that teaching the lifts and doing the lifts are completely different skills. Both take quite a while to learn. Obviously picking up the skills of the sport as an athlete are helpful, but an athlete knowing what to do and how they do it is a far cry from being able to teach that skill to others. It is especially difficult for gifted athletes to become good coaches. They have usually picked up the skills of the sport more readily than others, filling in the gaps between common cues by just doing it naturally. They aren’t really sure how they learned some of what they do. Athletes with less talent or who are learning the sport later than is optimal will not have that advantage. They have to be more careful about the details. They will need a good coach to fill in those gaps for them. It takes long (and usually obsessive) study and years of experience to learn how to impart the skills of weightlifting to athletes of widely disparate body types, ages, and talent levels.
I’m not good looking, in my head I sound like Bullwinkle when I speak, and I was a shitty lifter. So what makes me a good coach? I started the sport late, after football, powerlifting, and strongman, at age 41. I was old, already beat up by other strength sports, and not built very well for weightlifting. But, I fell in love with the Olympic lifts. So I worked at them. I sucked. I became obsessive about them. I found every resource and person I could to learn about them and how to do them. I turned myself from a shitty lifter into one that was only a mild embarrassment. It became an obsession that has lasted for more than fifteen years. In that time I’ve taught the lifts to hundreds, maybe thousands of people. I’ve encountered almost every teaching problem a coach can have, from standard cues not working at all and athletes built better for basketball than weightlifting, to lifters with thousands of reps reinforcing crappy technique. I’ve had to find a way to fix technique problems I would not have imagined I’d encounter when I first started coaching. I even taught the lifts to a blind guy. Teaching is problem solving. If you encounter many different problems, especially problems without standard solutions, you get better at it.
It was a lot of work learning and building the skills of a weightlifting coach. All of it was unpaid. I have actually spent tens of thousands of dollars myself to coach in this sport. Meanwhile, people are paying inordinate amounts of money to learn the lifts from some of the sport’s most decorated athletes, despite the fact that they have little to no experience as coaches. I don’t wish to sound bitter. I’m just being objective about the fact that coaching requires its own unique skill set apart from the capabilities needed to perform the actual lifts oneself. Even being the most successful Olympic lifter does not automatically give one the faculties required of a coach. It is unfortunate to see that many unknown coaches who have put in the time and dedication necessary to elevate their instruction are still struggling to make ends meet, often while continuing to produce high level lifters.

So why wouldn’t I pay to go learn from some of the truly renowned lifters? Because they do not have the knowledge and experience I want to tap...yet. Allow them to invest the same time and energy into coaching as they did into lifting first. But for now, you know who might get my money? Their first local club coach. The juniors’ coach who refined their skills and got them much stronger. Anyone know those guys’ names? ...Perhaps we should.

* Dan Bell is a USA Weightlifting National Level Coach and Head Coach of Rubber City Weightlifting in Akron, Ohio. He coached Holley Mangold to a USAW Junior World Team, A Pan Am Team, and the 2009 +75kg American Open Championship. He has helped Julie Foucher (2013 CrossFit Games, 2nd place) and Scott Panchik (2012/2013 CrossFit Games 4th place) refine their Olympic lifting technique. Mark Cannella and Coach Bell founded the Columbus Weightlifting Club in 1999. Dan and Mark started the Arnold Weightlifting Championships in Columbus and Coach Bell helped run it for 11 years. After leaving Columbus and a break from coaching, Coach Bell founded Rubber City Weightlifting in 2012 and began producing national level weightlifters again. Dan compares weightlifting to a 300 pound golf swing; the technique is that demanding and precise. He believes weightlifting to be the ultimate test of strength, speed, flexibility, and agility.
Look for more great education from Dan Bell as he will be Coaching our upcoming Vulcan Weightlifting Seminars!  For more info on seminars or if you would like to host a seminar at your gym contact us at vulcan@vulcanstrength.com